Sodor Scratchbuilding > Cinematography > Cinema lens mounts, milling machines, and other things that cost too much.
| No Comments

Cinema lens mounts, milling machines, and other things that cost too much.

After a three week wait for a BNCR-to-EF adapter to arrive from Poland, it arrived – and there is no hope at all of it fitting; the BNCR end of the Hajnal Snorkel interferes with it.

Granted, that’s not the end of the world. Just because an adapter doesn’t fit doesn’t preclude me from looking into modifying the lens itself.

On that very note, I knew the lens had already been modified once before, but I wasn’t aware how. The seller of the lens stated that it was “Converted by Visual Products of Ohio,” thing is, I hadn’t any clue what had been converted, much less what it had been converted from. And as it turns out, the BNCR mount itself was the clue; it was not a mount original to the camera, but a semi-permanent adapter. 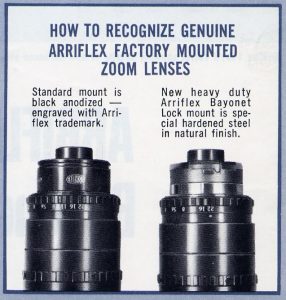 However, my knowledge of cinema lens mounts up to this point had been mostly confined to Arri PL (in common use today), BNC and BNCR (the old Mitchell standard), and Arri Standard. What I wasn’t aware of was Arri’s “B” Bayonet mount, introduced in 1965 to replace the Standard mount.

The Arri Bayonet features two small tabs that lock the lens in place; a simple enough design, but as I wasn’t aware to look for such a shape, I was completely unaware that I was looking at an Arri B mount on my own lens.

The adapter on the Hajnal Snorkel had a locking tab to prevent the Arri Bayonet tabs from unlocking, and for reasons that escape the concepts of basic serviceability, the locking tab can only be removed by disassembly of lens’ rear shell, including the adjuster barrel that controls the overall flange focal distance/backfocus of the lens to the sensor.

At the moment, my Arri B-to-EF adapter has yet to arrive, though one thing was certain after checking a few of the existing measurements The deletion of the BNCR adapter and conversion back to Arri B (for the EF adapter) would require a few millimeters of backfocus adjustment. This would seem simple, given the fact that it’s literally built into the unit, but it turned out the backfocus adjustment on this lens was set to “self-destruct:” 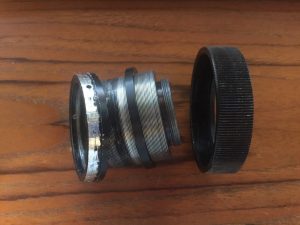 The stepped ring at left is intended to screw onto the barrel (center) and butt up against the other plain ring shown in the center of the barrel, while the step centers and sets the height of the barrel in relation to the lens. The large knurled ring at right is threaded on the inside, and spins onto the outer lens barrel until it fits up against the plain ring, locking the entire assembly into place.

The problem was that the stepped ring was originally cinched down with Allen-head set screws, which, upon tightening, damage the threads of the adjuster barrel upon which they rest. I was able to salvage the adjuster barrel and clean its threads, but the threads on the adjustment ring are beyond usable. I could have left it in place, but what good would a lens with the wrong backfocus be? 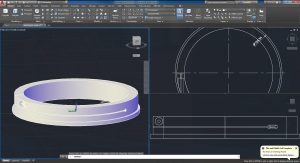 And so began a scramble to design a replacement in AutoCAD (only to find out Autodesk Inventor is a better choice of 3D modeling programs for the task). In doing so, I incorporated a slightly different design that would allow the ring to tighten on its barrel, but in a manner not self-destructive to the threads of either part.

I’m still trying to work out non-standard threads in Autodesk Inventor (the part’s female threads have a 51.5mm major diameter; and a minor diameter of approximately 52mm) which meet no known ISO or ANSI standard that I can find. In the meantime, I’m also in touch with a firm that does CNC work locally. We’ll see what happens…