Sodor Scratchbuilding > Cinematography > Not one, two periscope lenses to choose from. What to do?
| 4 Comments

Not one, two periscope lenses to choose from. What to do? 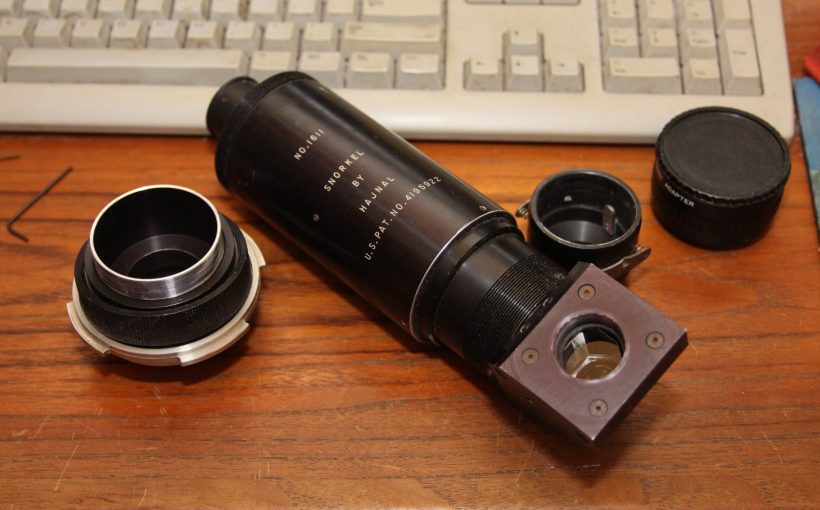 In an earlier post, I explained about how virtually every choice in a small 10-bit, 4K-capable camera would run almost the same as a periscope lens built for the job of capturing miniatures to a S35-sized camera sensor. 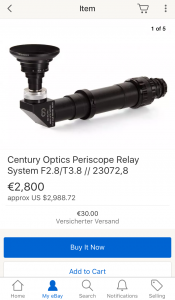 And so began my search. And shortly thereafter, an opportunity presented itself in the form of a Century Optics periscope being offered by a Leica store in Austria – with a princely tag of approximately $3,000 USD.

Furthermore, after conversations with the seller, the mount turned out to be a B4-style bayonet, for ENG/news cameras with much smaller sensors. Concerned that this would never be workable as-is, I contacted Century Optics directly.

Century Optics informed me that this particular relay – known as the V35, predecessor to their current S2000, has an interchangeable mount, which could be swapped with an Arri PL mount that they offer – for another $450 – and may require an additional 2X Arri PL-mount teleconverter for $1,900 and change (which could also be achieved with a much cheaper EF teleconverter).

At this point, though it’d still be the lens, it’s mount, a PL-to-EF adapter, and a teleconverter hanging off of that just to get it to the camera properly. At these prices, not quite my cup of tea. 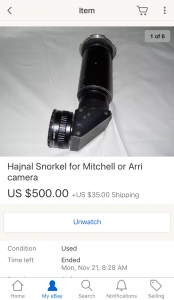 BNCR mount. Keen fans will recognize the Mitchell name as the manufacturer of the 35mm cameras originally used by David Mitton and Terrence Permane on the show, and that alone indicated the lens would natively support 35mm film – and thus cover the image circle of an S35-sized sensor in the current digital world.

And with the comparatively reasonable price, it seemed a shoe-in. And shortly after discussion with the seller, I purchased it.

But I still didn’t know what the “Hajnal Snorkel” lens had in store for me upon arrival. And so I waited…

Hi, do you have any interest in selling you Hajnal lens?

Hi, Really interesting process of discovery here.
Plus, you were in luck to find that Hajnal Snorkel. They are a very rare item.
I’m curious why Century are suggesting you would need a Teleconvertor?
Is that purely to attach to your BMCC, due to the V35 rear element depth?
I don’t recall ever having used a teleconverter with the Century.

I don’t remember the details that well, but I was able to review my emails with Century. In one particular exchange, Century claims the following (about the V35): “If I recall correctly it will cover full 35mm format, Super 35 will require an extender.” Unless optical theory has gone past the Twilight Zone into opposite day, I’m quite certain Century meant the reverse; that the periscope would cover S35 with the PL adapter, but full frame 35mm would require the extender. If so, it should have bolted up to the Blackmagic 4K without the extender. Periscope or no periscope, there’s… Read more »

Simon
Reply to  The Sodor Scratchbuilder

In another of your posts you’ve mentioned some vignetting. Has that been an issue?
Understandably not all lenses will offer full cover S35., perhaps that’s what they were referring to?
The image format diameter of the V35 is said to be 32mm
Out of curiosity…
What sort of lens sizes are you dealing with. I usually try and shoot miniatures with on the wider end of the lens ranges. 18, 24mm etc
Keeping the field of view wide, but trying not to affect the architectural elements too much.